Let’s talk slow feeders.  I believe horses should have free choice hay 24/7; but if you have a lot of horses (or even just a few horses), that can be a lot of money.  Enter the slow feeder.  Typically a slow feeder has some kind of netting that covers the hay.  The horse has to pull the hay out through the small holes in much the same manner he would pull on grass in the field.  This considerably slows down how fast they can eat. 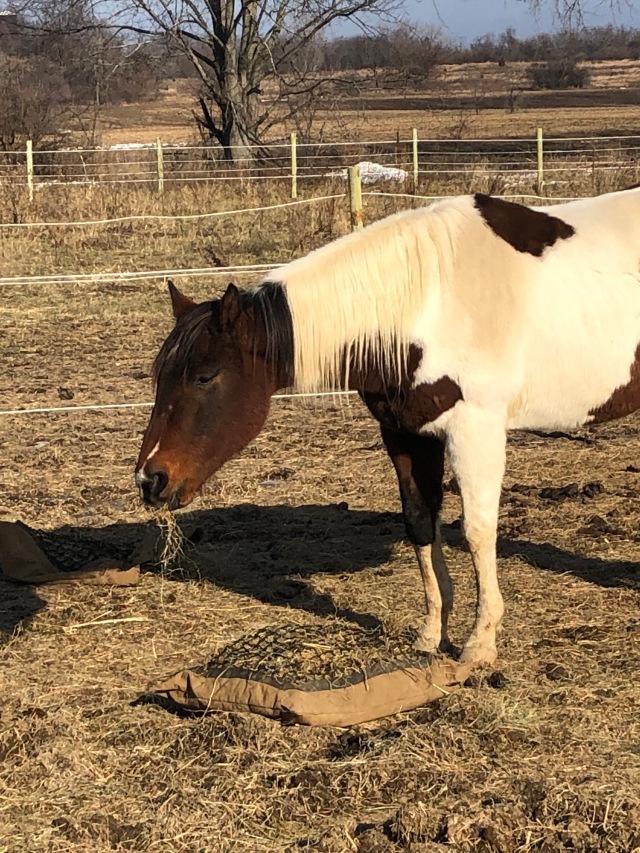 Some people worry about a horse getting frustrated by that, but I feel like some of our horses even prefer it to free hay as it feels more “natural” to them to pull on food as if it were attached to the ground. 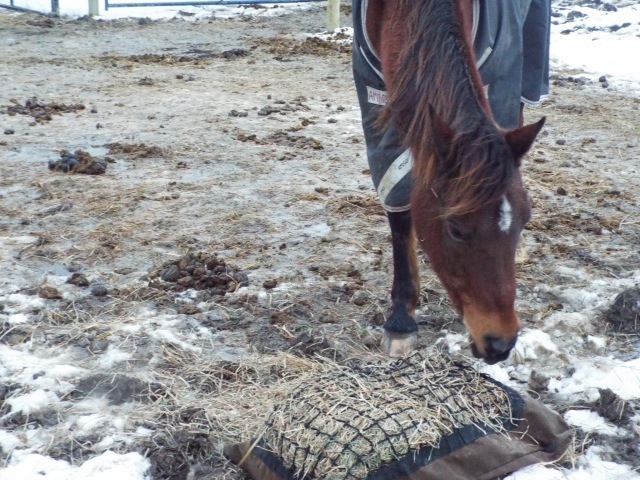 The first slow feeders we got are called Hay Pillows and they look like a pillow.  They zip open and closed.  They lay on the ground so that the horse is eating just as if it were eating grass with it’s head down. 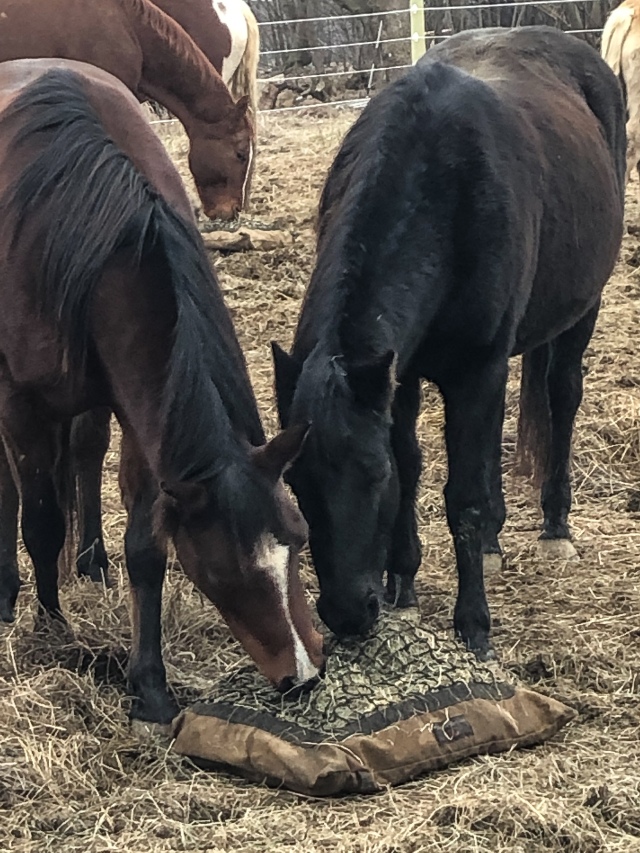 We really like using hay pillows and the horses like them too.  We use multiple pillows, spread around our feeding area, so the horses move from one to the other.  Movement is something we are always trying to encourage.

The biggest problem with them is that we live in Illinois and we have times when it rains and gets super muddy.  This can make it very messy.  Sometimes we’ve lost them in the mud as they are the same color. Or it snows and the zippers freeze shut.  Or it rains and then freezes and then the zipper really freezes shut and sometimes the whole pillow freezes to the ground.  But in ideal weather (do we ever have that) or even when it’s not so ideal, we really like using them and continue to do so.  We’ve learned to rotate them out.  We have 9 and put 4 out at a time and let the others dry out.

Then I found a place called DIY Slow Feed Hay Feeders. They have all kinds of ideas for making hay feeders and they sell the netting you can use.  We really liked the ones where you use an empty 100 gallon water trough. 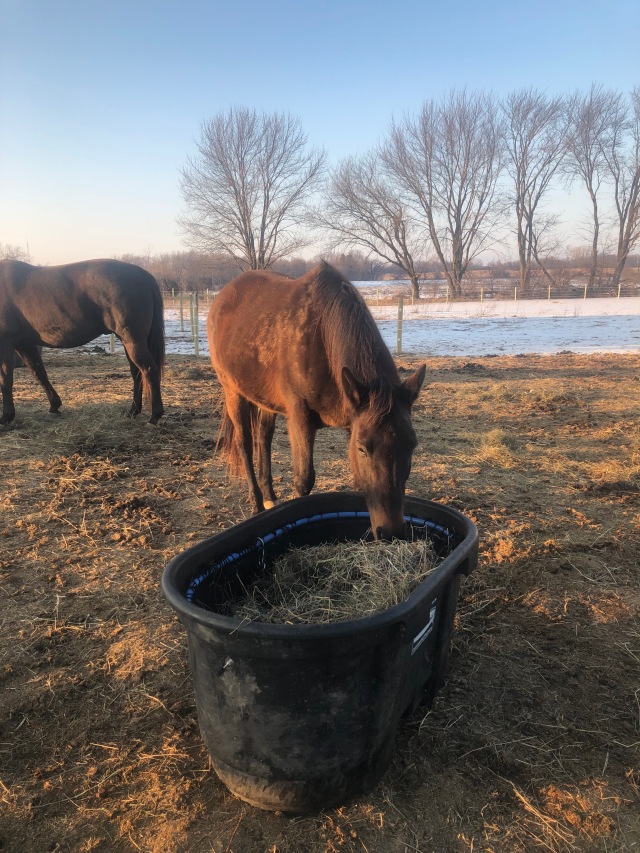 You buy stiff, plastic tubing and eye bolts, etc. and you attach them to the netting and then to the plastic feeder – they have directions and all kinds of ideas on their website if you’re interested in making one. 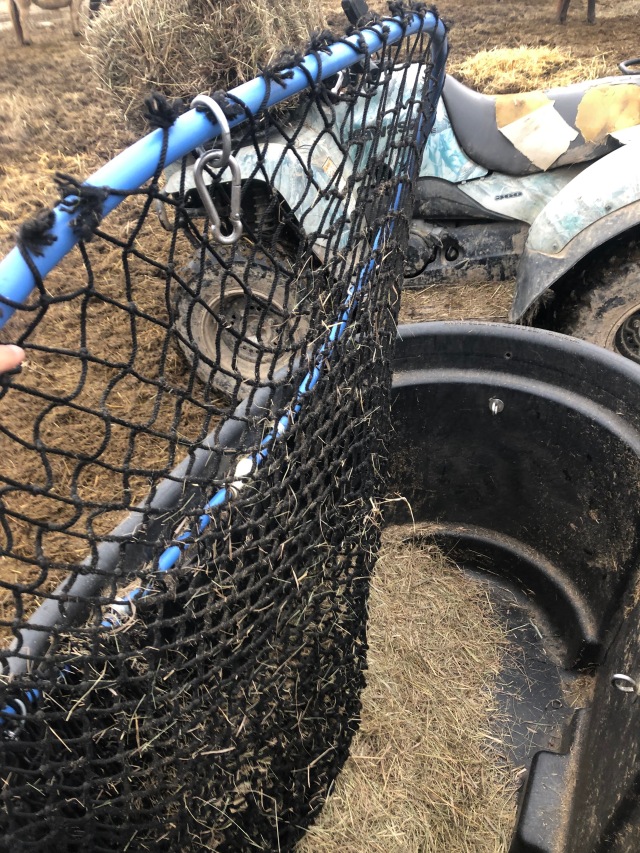 Anyway, we really like them.  Though, it did take some trial and error to get them right. The directions say just tuck the blue tubing under one eyebolt and it will stay put.  Well, we have a few select geldings in our herd who figured out if they just bash the feeder around a little, they can get that tubing right out from under the eye bolt and then they stick their head under the netting for free hay!  Some would say this is very ingenious of them.  Others would say it’s super annoying.

You can see on the picture below where they are trying to lift the blue plastic up, so they can stick their noses under it.  They haven’t managed to do it quite yet, but. . . 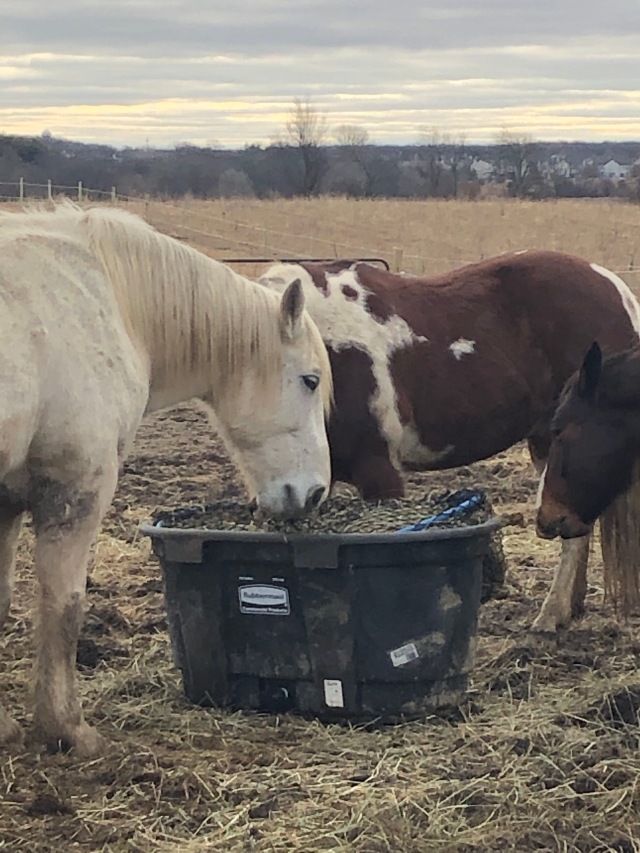 So we ended up putting medal rings on four sides of the plastic trough and then an eye bolt on each end and we use caribiners attached to the eye bolt and the ring to hold the netting in place. 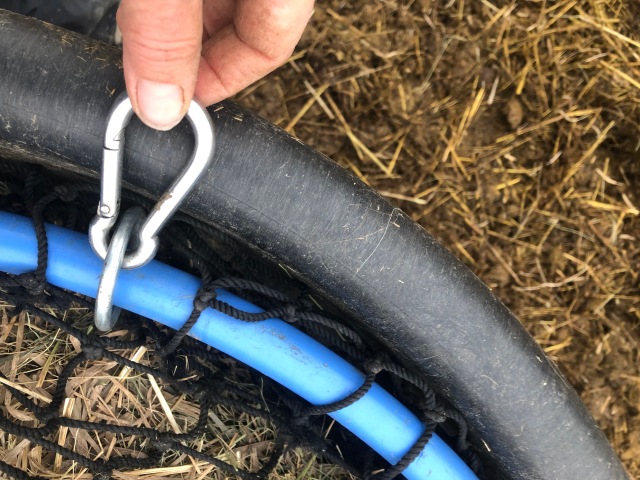 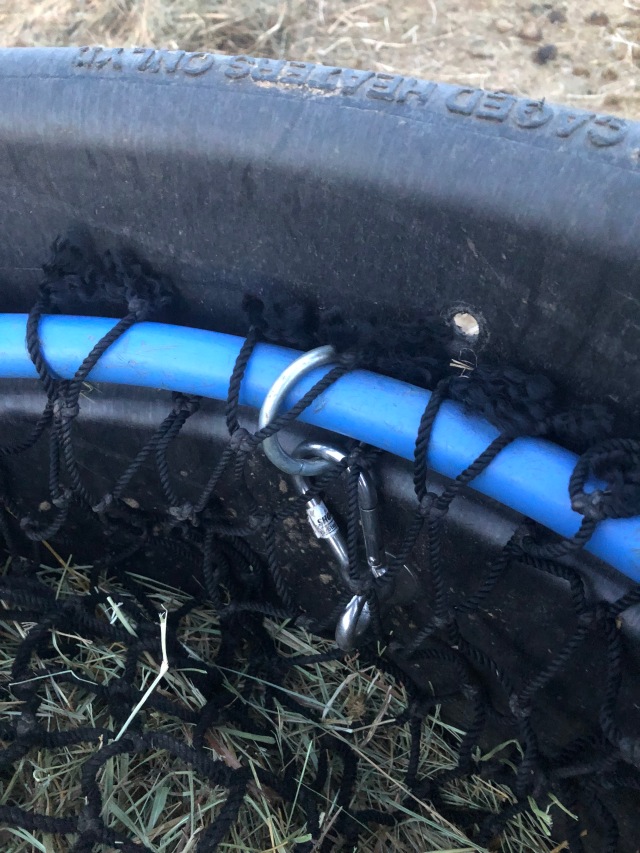 This can be tricky sometimes to unhook when it’s below 0 temps and your fingers are struggling with the medal and want to fall off, but it’s worked the best for us.

Some of the select geldings I talked about will knock the feeders over to get some of the small pieces of hay to fall out of the net onto the ground – especially if there are bits of alfalfa in the hay.  Some would say, ‘oh how smart of them’, others would say, ‘how lazy’ – you decide which.  But the feeders have stayed together, so far. 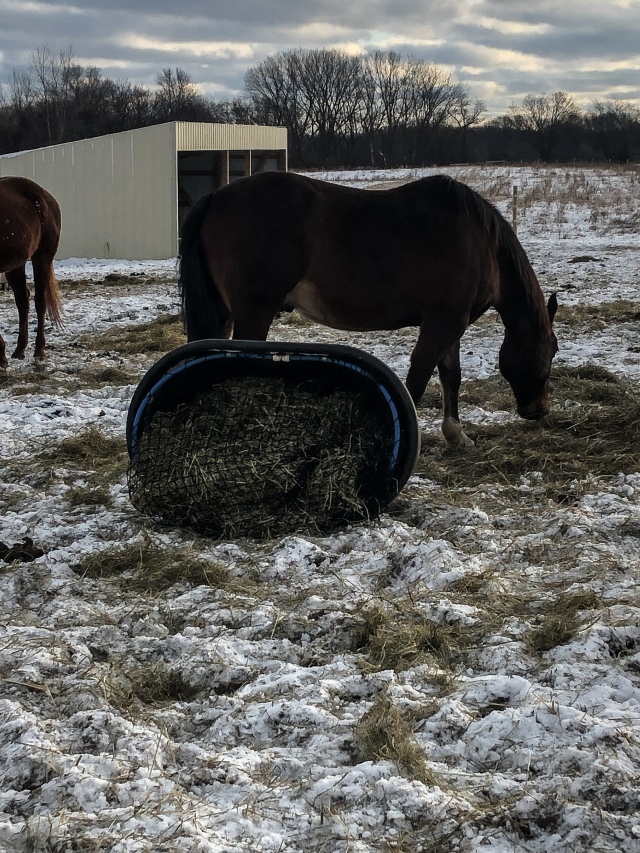 We did try a third slow feeder pictured below, but the netting holes are too big so it doesn’t slow them down at all.  We do still use the plastic container though, without the netting, to just put hay in to keep it off the ground. 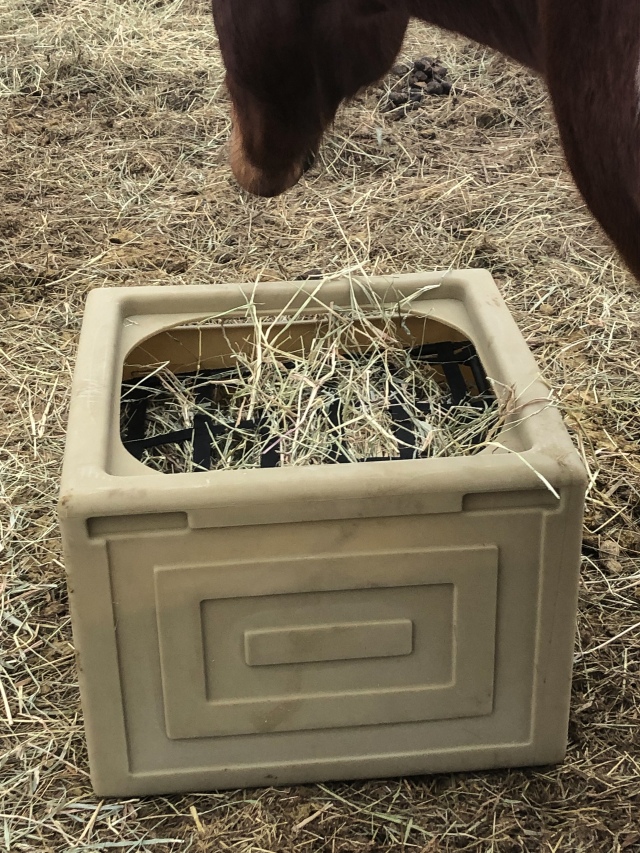 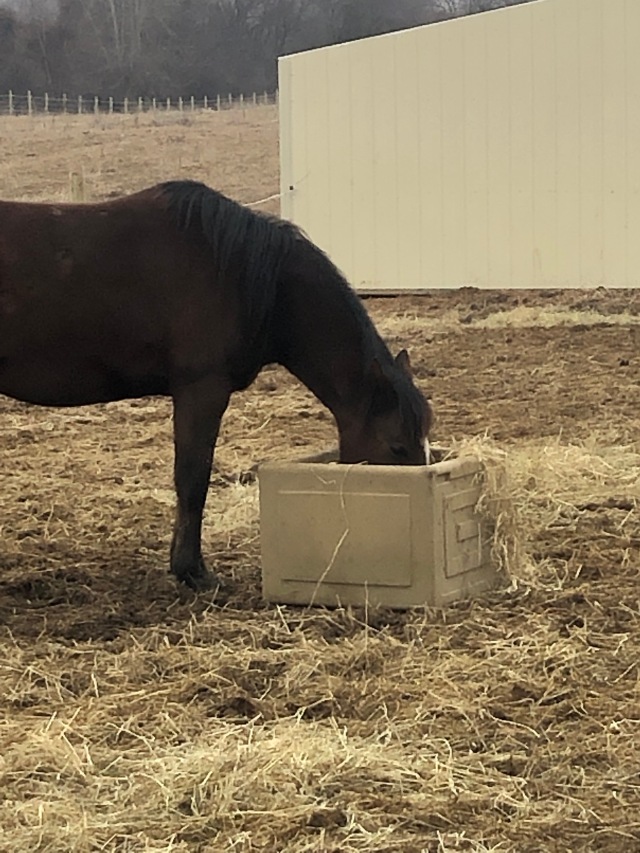 We also use hay nets that we got from the Hay Pillow people that we attach to fence posts.  The horses like those too. 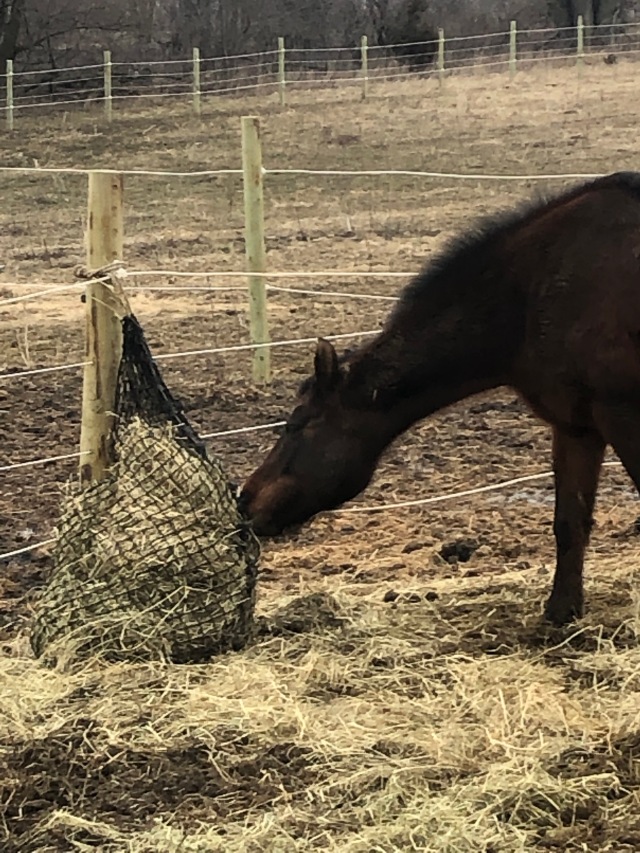 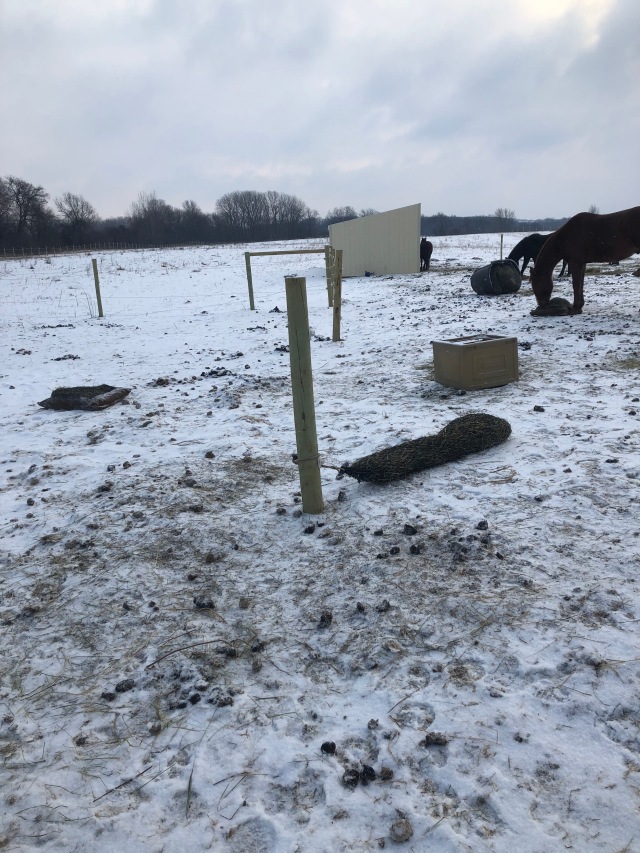 Using a combination of all of those we have four water trough feeders, four hay pillows and three hay nets.  That’s a total of 11 places for horses to eat from.  We have 15 horses in the herd.  We also spread some loose hay twice a day.  Once they gobble up the loose hay, they each find a place at a slow feeder and rotate around.  It keeps them moving and eating most of the day/night (all day/night if we get it right). 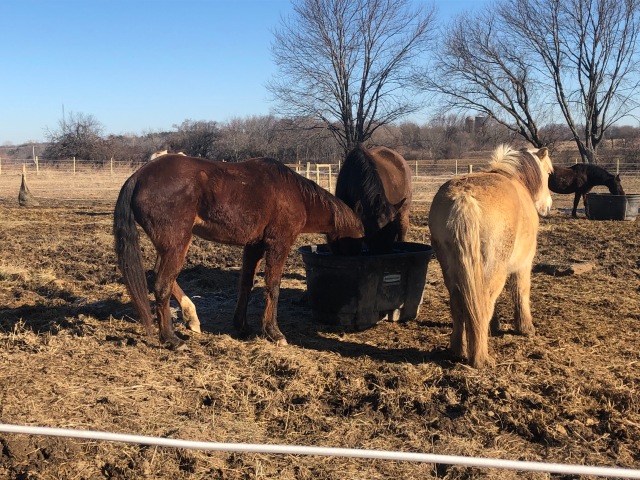 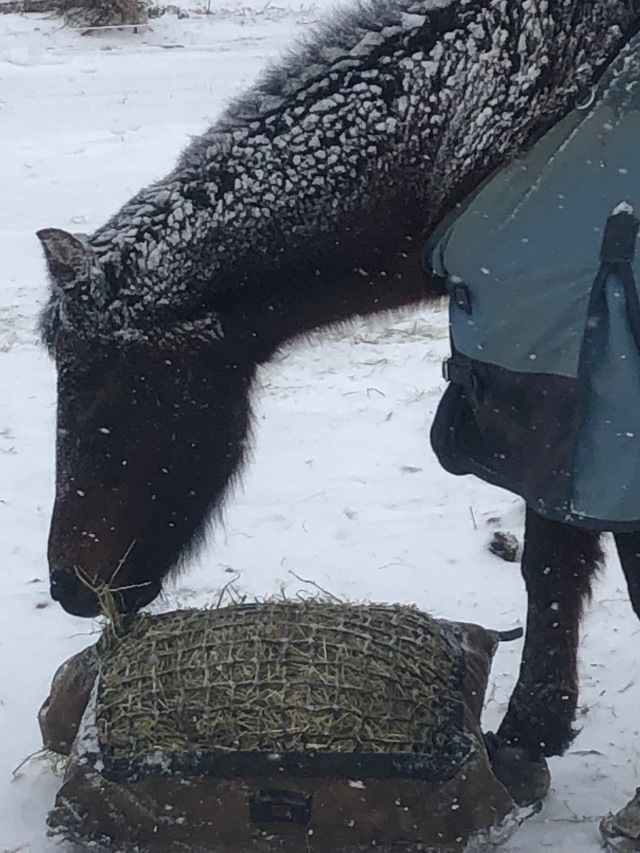 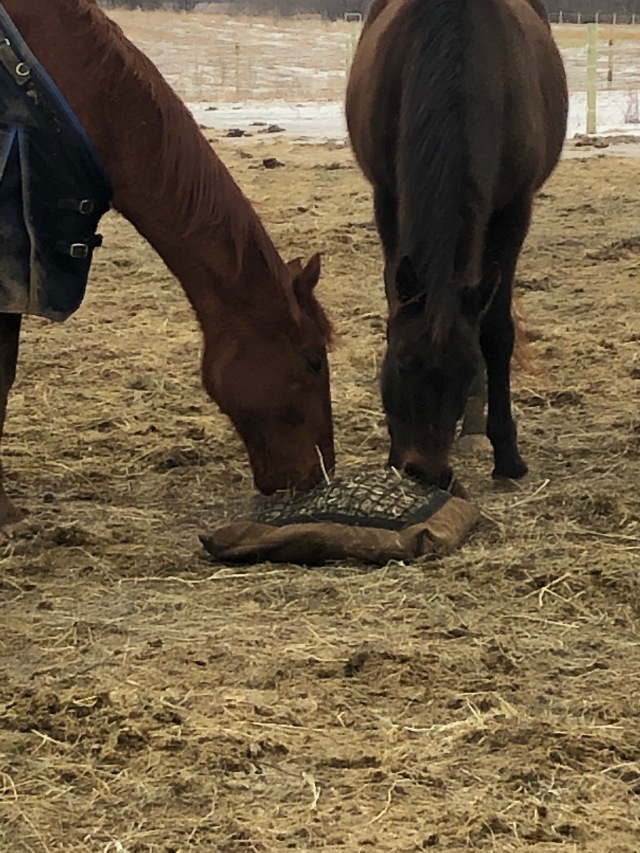 Nothing replaces a big field of grass, but when we don’t have that, the slow feeders work out nicely for us.  And we hope it keeps the herd healthy and happy.

This site uses Akismet to reduce spam. Learn how your comment data is processed.

The latest in horse hosiery and food wear - Mud. 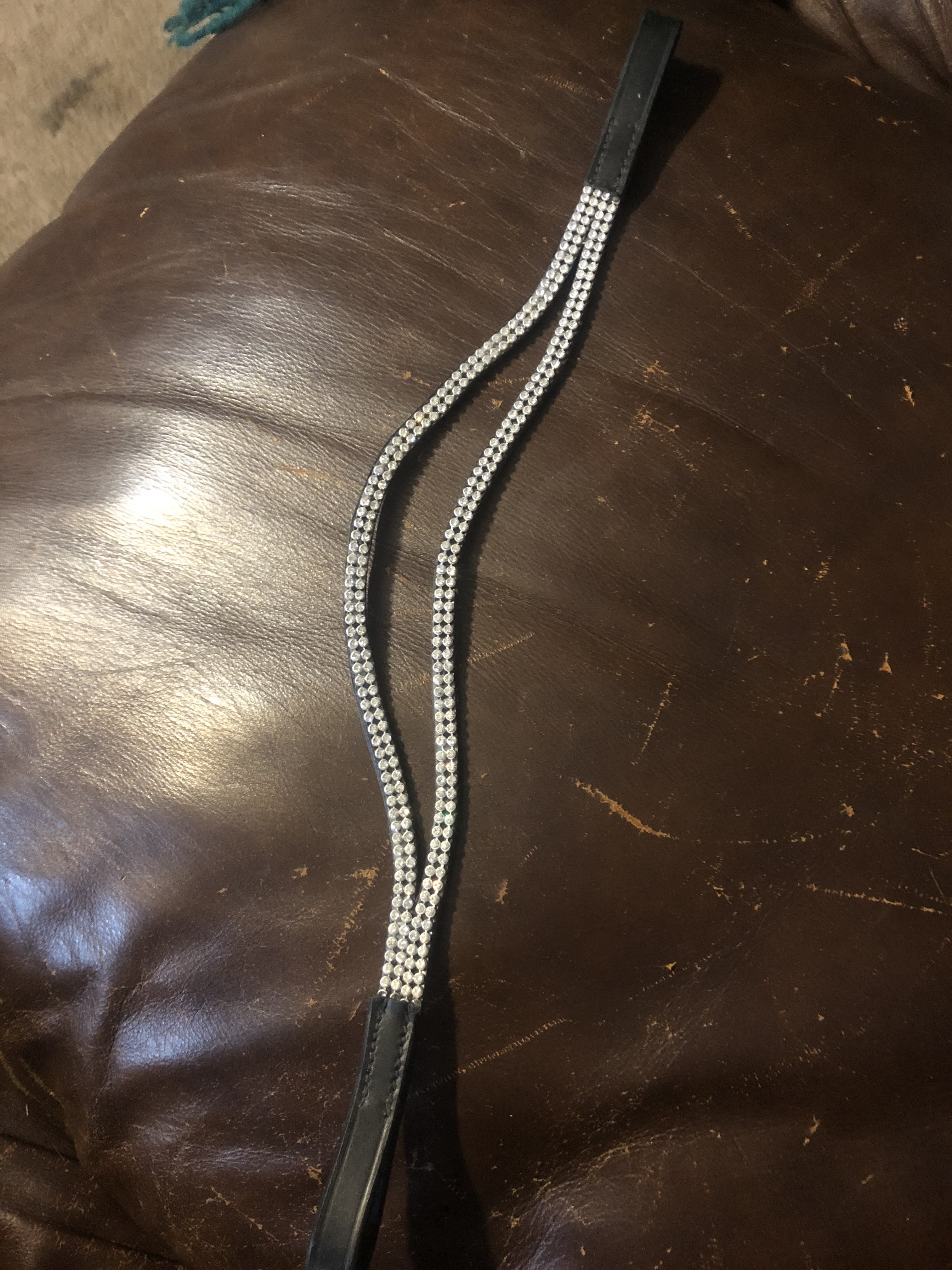