We’ve got three pastures.  Eighteen horses.  Some boarded, some owned.   That last part doesn’t matter, cause they all like to eat grass. Our goal is to have healthy pastures and healthy horses, so we rotate the herd from pasture to pasture. 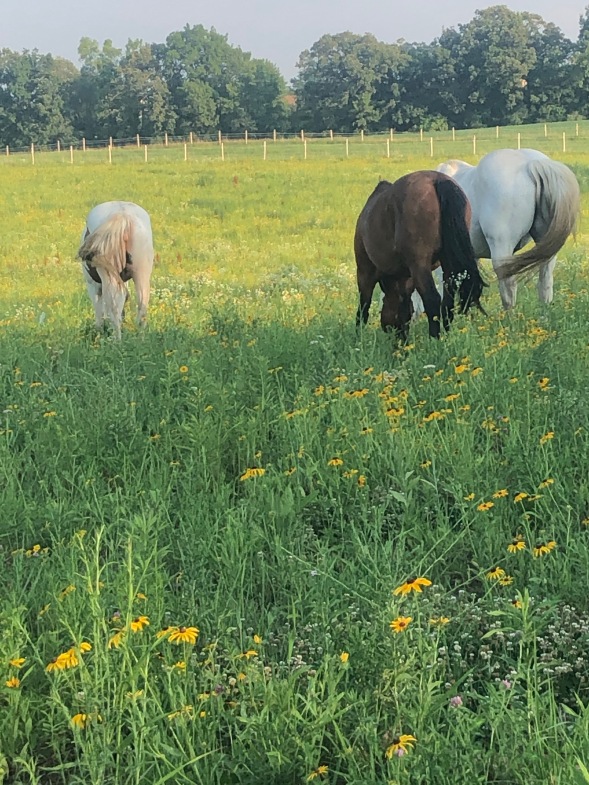 So, three pastures – one we call our winter pasture which doesn’t make a lot of sense because we live in Illinois and there is no real grass in winter.  But, it has cool season grasses planted in it like Orchard Grass, Timothy Grass and Kentucky Bluegrass.  Also Virginia Wild Rye and Canada Wild Rye.  It is happiest in the Spring and Fall when the temperatures in Illinois are cool or worse. 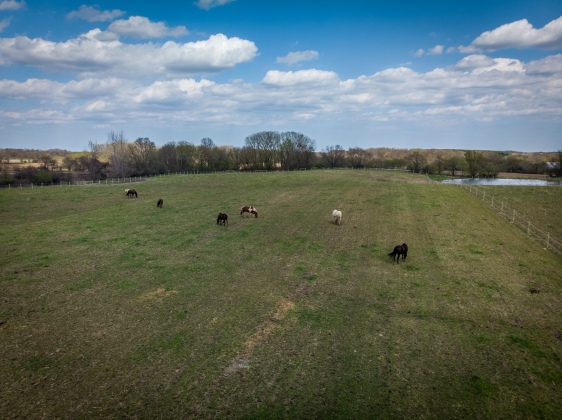 This is an arial view of our winter pasture, at a time when there isn’t too much grass growing yet.

The next pasture we call our summer pasture because it is filled with warm season/natural/native grasses.  If I could plant all our pastures with native grasses, I would.  They are prairie grasses, native to this area and they just understand Illinois and all it’s fickle weather conditions and it decides to grow anyway.  We have Big Bluestem, Indian Grass, and Canada Wild Rye in there.  Intermingled and sometimes taking over in areas, we planted forbs. Some would call them wild flowers, some would call them weeds.  Their more naturalistic name is forbs. Things like Black Eyed Susan, Yarrow, Culvers Root, Wild Quinine. Oh and don’t forget clover, both white and purple.  We have that in both pastures. The horses do eat all of them from time to time, depending on what they need. 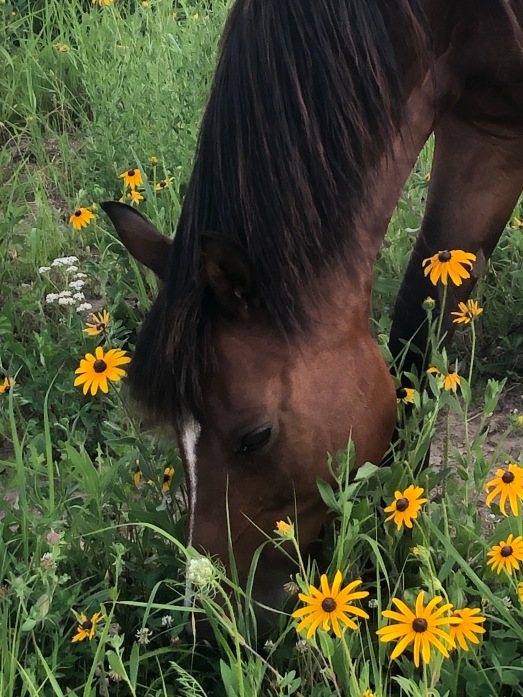 The summer pasture is a true wild meadow and it’s good for the earth and good for the animals, birds and insects that frequent it.  It does best in hot/sunny weather though.  In the cool Spring months it takes longer to grow, so in order to have a longer grazing season, we have the cooler season grasses in our other pasture.

This video is Flash running out into the summer pasture.

The third area we call the Hay Field because we originally planned to use it for hay, but after the first year, we realized we needed the extra pasture for rotation.  Two wasn’t enough to give the grass enough time to recover after the herd had been eating in it. 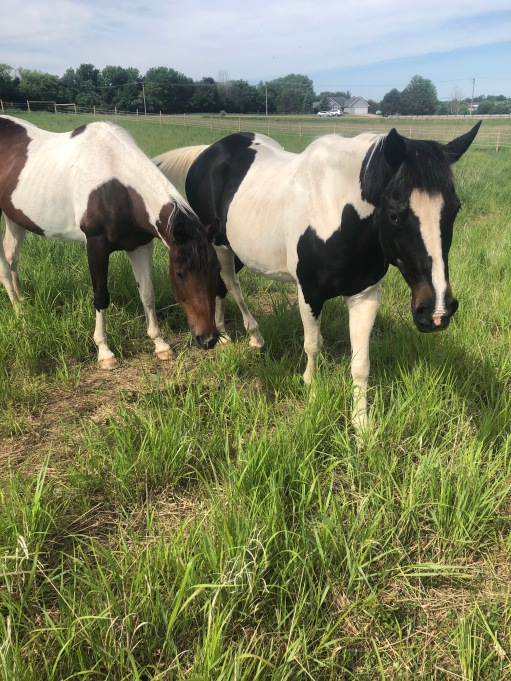 This video below is the herd coming in from the hay field, going up to our arena where we feed grain and supplements.

So, the reason for having three pastures is that we rotate the horses on and off them.  Lately, each pasture has had the horses in it for about two weeks.  After those two weeks, we rotate the herd to another pasture.  Ideally, we like the grass to be close to shin or knee height.  That doesn’t always happen, but the longer it is, the less sugar and the better it is for horses.  Unlike pastures for cows and other livestock, we aren’t trying to fatten our horses up, so we want low energy pastures.  We want nutrition, so it can’t be too long, but if it’s too short, it contains more sugars which equals fat horses and sometimes diseases such as Insulin Resistance and Laminitis.

Horses like to graze in patches too.  They find their favorite areas and go back to those, eating it down very short and leaving other areas long.  Rotation allows those high traffic areas to rebound.  If you allow the horses on there all summer, those areas get eaten down and sometimes the grass can’t recover.

Our pastures aren’t lush.  There are bare spots and they don’t always look so pretty, but that’s okay.  Horses really shouldn’t be on lush pasture.  We want to encourage movement by walking from patch to patch and eating here and there.

It can be hard trying to maintain the pastures and hoping/praying the grass gets long enough and the horses don’t eat it all down in a day.  We are still learning, but this year the grass has come in the best it has in the three years we’ve been here and the horses seem happy. 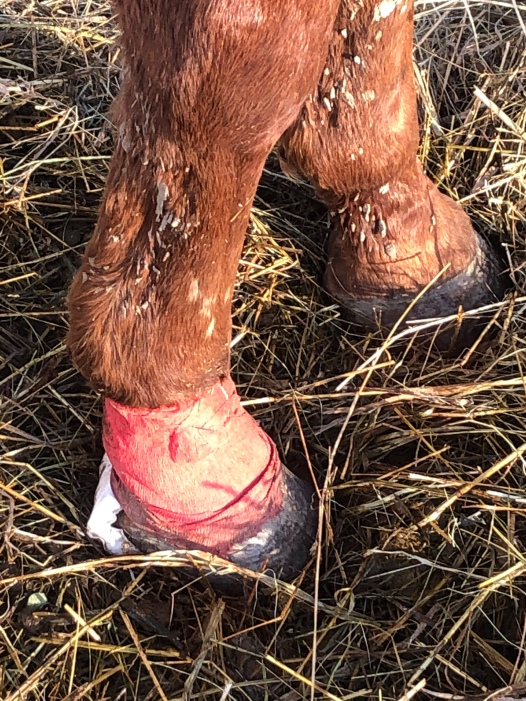 Right now we have three horses with abscesses.  Many people soak the hoof in epson salts and then wrap. 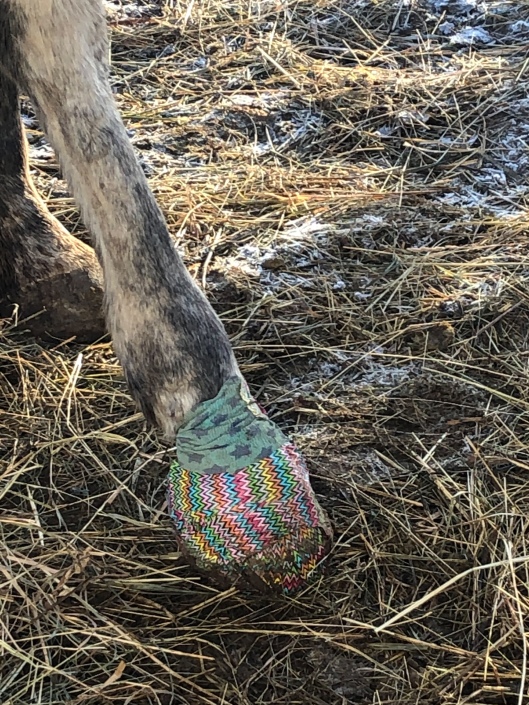 Some people just leave them and let them work out on their own.  Both seem to work.  I believe movement is most important and, as hard as it is to see a horse limp around, the abscess bursts faster and the horse is happier than being put in a stall of some kind.  If a horse gets an abscess at our ranch, they still are out limping around.

We are all about slow feeders and hay nets this time of year – hay eating season. We started out using the plastic frames, but the horses broke those, so when they came out with medal frames, we bought those and so far they have worked well.

We also have hay nets from Hay Chix.  I love their nets.  They are strong and last long.  And we need strong, cause horses break everything.

We have all sizes.  Small square bale size, like the photo above.  We also have two round bale sizes that we used for round bales this summer, but now we can’t find round bales that are horse quality and also priced decently, so we’ve set up goal post looking stations and hang the nets on those to keep them mostly off the ground and easy to fill with loose hay.

We put them close to the electric fence so the horses can’t get behind them as they are open in the back for easy access.

We just put medal T-posts in the ground and covered them with pvc pipe and used plumbing fixtures on the end to fasten the top piece on and then used rope to hold one side of the net on.  I can’t say they are full proof because sometimes the horses knock off the top horizontal post.  It’s an easy fix, but it always frustrates me.

The horses aren’t supposed to get behind them, but then they do. . . 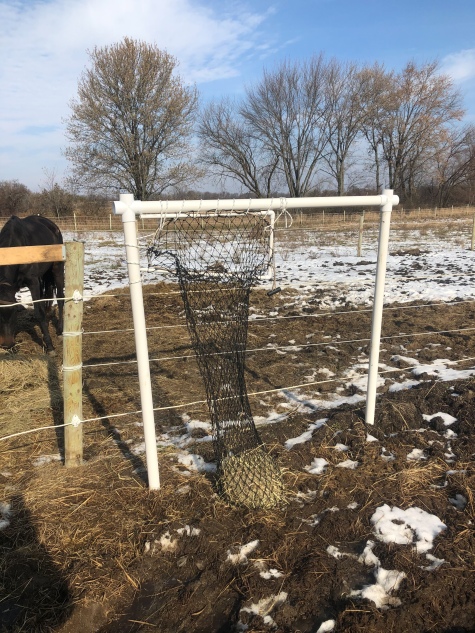 We also hung one with a small hay net.  We have it kept open with a plastic frame we made with pvc pipe, for easy filling. But the horses kept breaking the plastic frame.  Should I be surprised? So we are now trying out a medal frame.

None of it looks pretty, but it gets the job done, and makes our lives a little easier.

We also continue to use hay pillows, 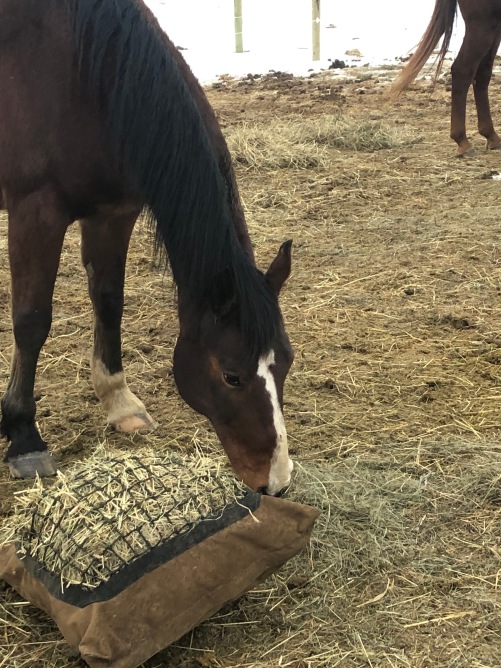 but we mostly just put those inside our arena/shelter as when it gets muddy they turn into a big muddy mess and are very hard to use.  The zippers get stuck and it just doesn’t work.  We used them a lot last year, but have turned to using hay nets much more this year.  The hay pillows are great when the weather is nice, but this is Illinois and this time of year, the weather is never nice.

Winter is hard.  Winter is harder when you have to be out twice a day feeding horses.  But we muddle through and we try to come up with ways to make our lives easier.  Then we wait for the horses to break them.

It’s Fall, and though we have birds at the ranch all the times of the year, they seem to be everywhere come Fall.  We are used to seeing birds in the sky, but these days, we see them mostly on the horse’s backs or at their feet.  Why is this? 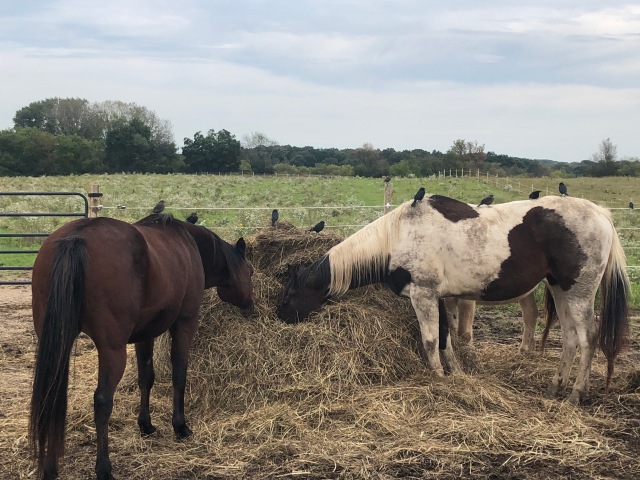 I did Google it.  But didn’t get an exact answer.  Some say the birds are trying to keep warm.  Some say they are picking insects and food off the horses.  I wish that one were true.  I wish the birds would eat ALL the flys and ALL the mosquitoes.  But they don’t.  Maybe they eat some, but not enough to tell with the naked eye. 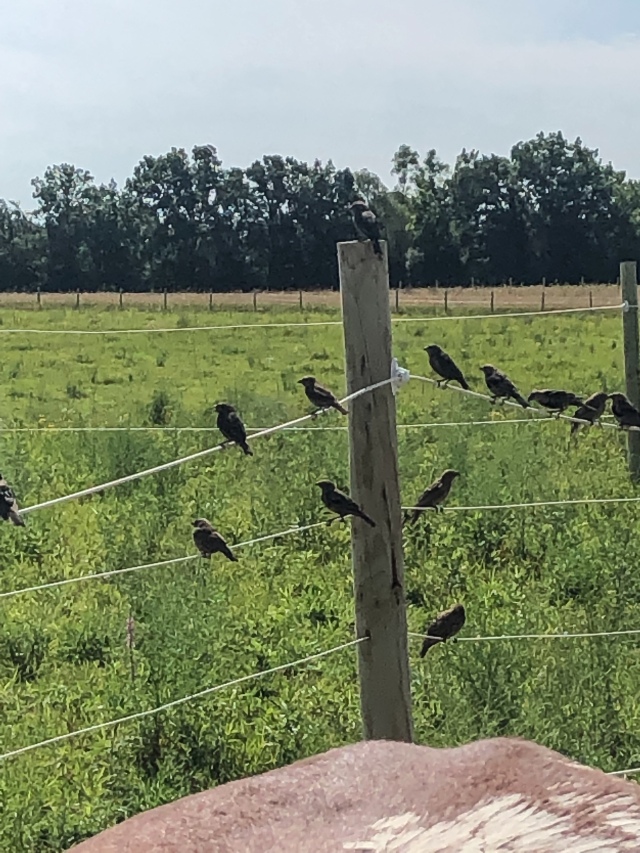 Food starts to get scarce in the Fall and the birds haven’t quite made it south yet, so they hang out with animals that are dropping grain.  Smart of them, right. 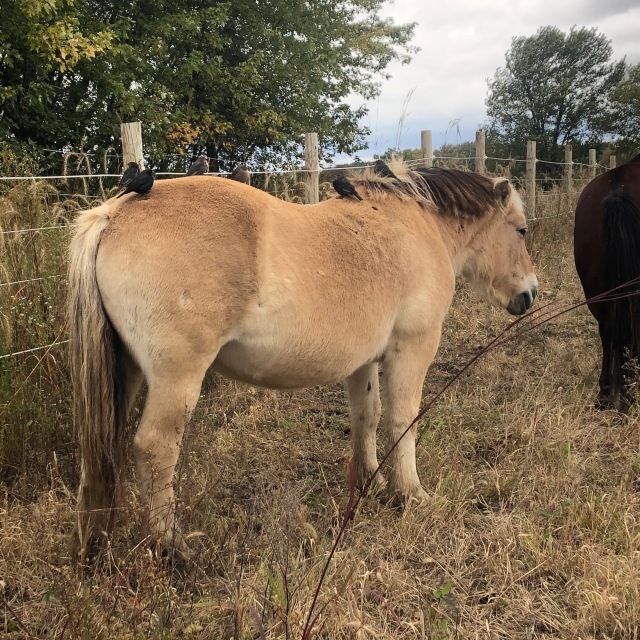 I could be wrong.  Either way, I bet both species are benefiting from the other in some way.  Most times, nature tends to work that way. 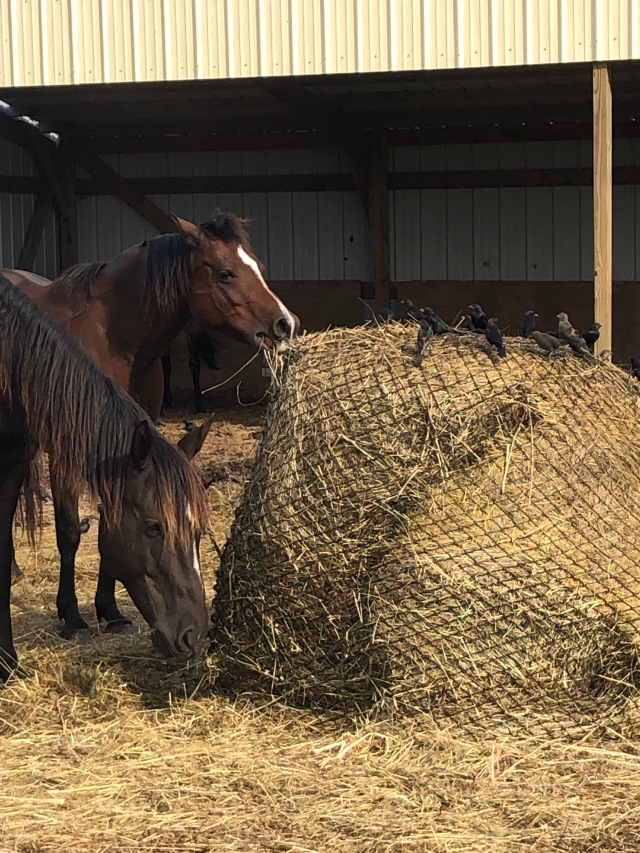 This is Ralph and Ernest hitching a ride on Liberty.  Or maybe it’s Edna and Bernice.  It’s hard to tell.  They all look alike.

Video-ed here out in the pasture.

Here he is again Video-ed with his owner’s grandaughter, Cassidy

He’s a good horse.  Very popular.  Possibly more popular than he’d like to be sometimes.

We had a lot of riders this week, both in the arena and in the pasture.

We also got started putting up a door on one side of our arena.  This has been an ongoing project for many months.  This week, we tried to mount the medal piece the barn door will slide on.  Unfortunately, after risking life and limb, on ladders and tractor buckets high in the air, the measurements were off.  So, it didn’t get finished, as we ran out of time. 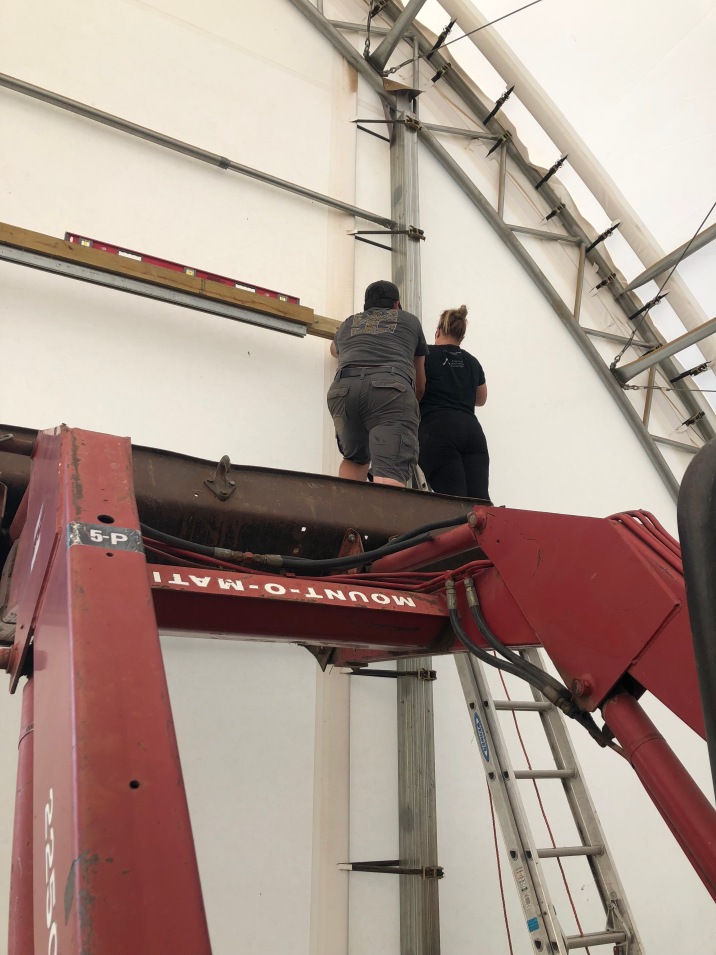 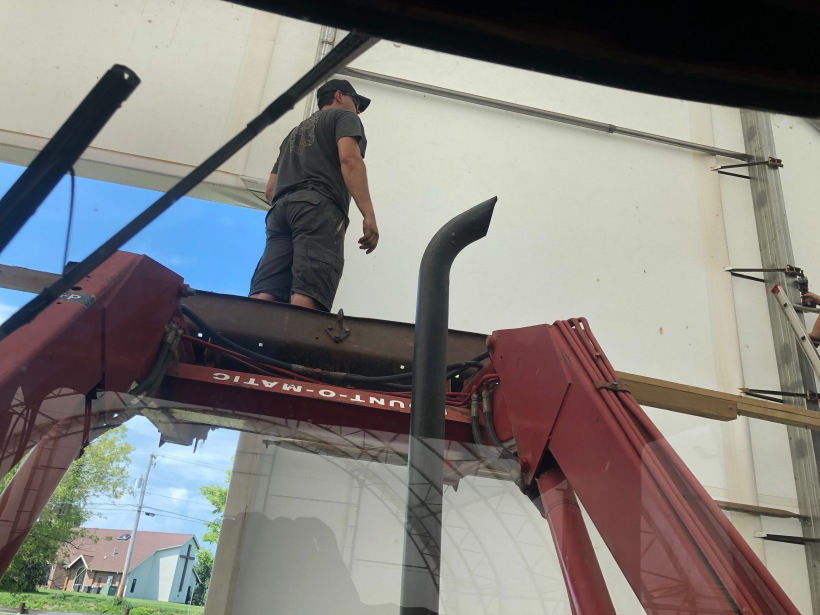 We like to encourage wildlife visits to our Ranch.  Here we see Mr. or is it Mrs. Crane coming for breakfast in the rain. 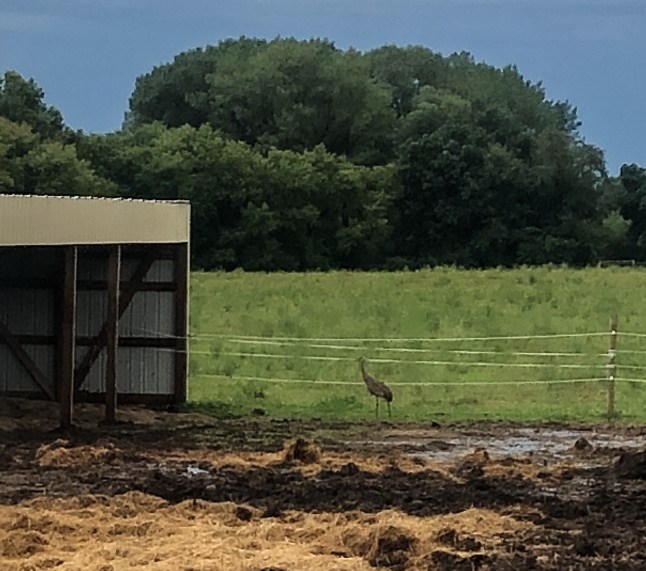 This is Evie.  Her absolute favorite place to be is in the pasture.  Even when it’s pouring rain and the rest of the herd has run in to the shelters, she continues to eat.  Well, she’s not actually eating in this photo, but she was just seconds ago.

Evie also likes to groom and be groomed.  Who doesn’t, really?

And I’ll leave you with this.  Coming in from the pasture.  Finished with our ride, or our blog post, whichever the case may be.

No two days with horses are ever alike.

One day everything is going great.  Ms. Mare and Mr. Gelding are doing everything you want.  They are calm and collected.  The sun is shining.  Life is great.

The next day, you go out to the ranch and BAM – flat on your back in the dirt.  Ms. Mare won’t listen.  Mr. Gelding is pushy and demanding.  It’s raining and there is mud everywhere.

Days at the ranch are really just like the rest of life. . .

One day work is going great.  The radio station is playing all the right songs.  The kids are calm and collected.  Traffic’s a breeze. The sun is shining and life is great.

The next day – BAM – flat on your back in the dirt.  The car won’t start.  The bank account is overdrawn.  You get a parking ticket.  The kids won’t listen.  Your boss is pushy and demanding.

Life will always be up and down no matter how together and ordered you try to make it.

Some days it feels like we’ve come so far at this Ranch.

Others days it feels like we have so far to go. 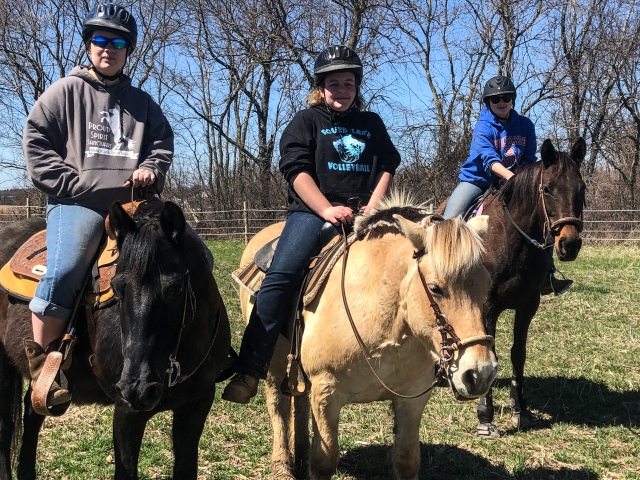