Horses love to eat.  And, who can blame them.  Grass, weeds, oats, hay – what’s not to love?  And when it comes to eating, even the most mild-mannered horse –

Most barns have stalls or they tie horses at feeding time to separate them.  We don’t.  We opted for feed buckets.

They are kind of what the name implies.  A bucket type thing that gets hung around their ears, so they can eat their food (while free to roam) and no one can steal the food from them.  It’s been a process figuring it all out.

When we first started, we bought some ready-made, mesh-fabric feed bags. 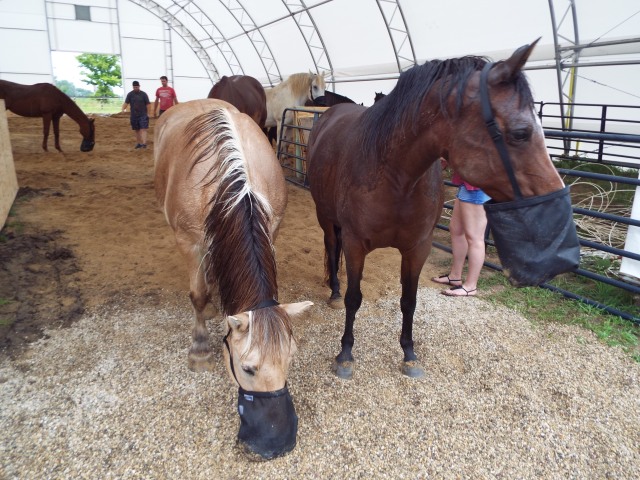 We didn’t use them long.  First, they were mesh, so sand and dirt got in them if the horse was eating in the arena or on wet ground.  Second, they were a b*&%$ch to clean.  You had to turn them inside out, and food got caught in the corners.  No.

So, we thought, let’s try real plastic buckets.  The first ones I got were from Home Depot.  Mop buckets with a spout.  They were really too big and bulky and we had to tie cord around them as there was no place to hook a cord onto.  They weren’t right.

One of our boarders suggested using  TubRugs with horse blanket leg ties for the straps.  So I promptly ordered three of those to try.

In the meantime, I bought some smaller grey buckets from Ace Hardware.  There was no spout and there were plastic holes on the sides you could hook the straps to.

Those worked pretty well, though they aren’t very heavy duty, so some of them got cracked and some of the strap holes broke.  We still use some of them, but we moved on.  The TubRugs arrived and work out decently.  That pink one back there I got from Tractor Supply in Wauconda, if interested.  The others from Amazon.

The trick is getting the straps right for each horse.  If they are too loose, the horse’s head comes out of the bucket and they struggle to get it back in to eat – and they get a little upset.

They are nice too because the horse can really move around in there and get the morsels left in the corners.

I also got some more heavy duty buckets from Menards and from Tractor Supply.

We like these a lot as they have a medal ring on the side that the leg straps can clip onto making it sturdy; and they aren’t as flimsy feeling as the TugRugs.

The horse doesn’t have as much ability to move his head around in it though and sometimes food gets caught in the sides/corners that the horse can’t get till you take it off and set it down on the ground without the straps around them.  Then, of course, another horse comes along and steals it from them.

We use Sharpies or Paint pens to put their names on each one, then change them up and cross out the name and add another and completely confuse ourselves. 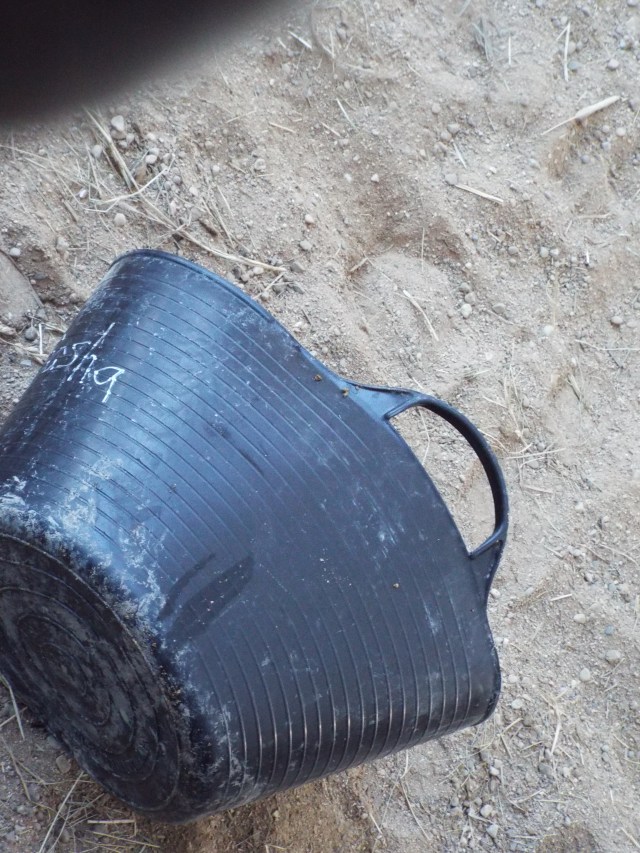 One of the main problems with this way of feeding is if you have horses that eat slower than others.  We have a few senior horses in our herd who eat slow, so we separate them from the herd when we feed. 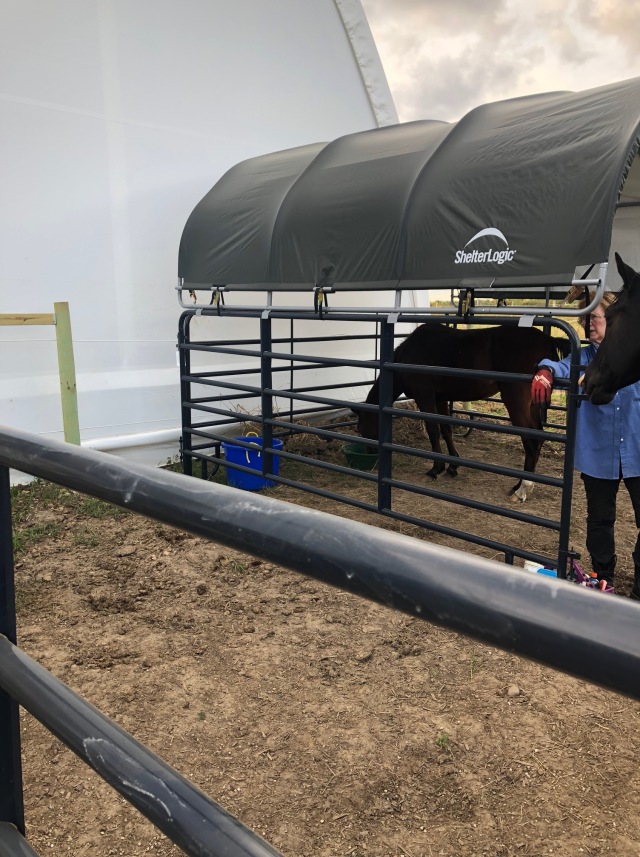 All-in-all, it works out.  There are moments of chaos when we first start putting the feed buckets on and all the horses want theirs at the same time.  But things calm down as soon as the more aggressive members of the herd have theirs.  I’m sure there will be more tweaking as time goes on, but for now it’s working.

One thought on “Feeding the Herd”

This site uses Akismet to reduce spam. Learn how your comment data is processed.